An elevator (US and Canada) or lift (UK, Australia, Ireland, New Zealand, and South Africa) is a type of vertical transportation that moves people or goods between floors (levels, decks) of a building, vessel, or other structure. Elevators are generally powered by electric motors that either drive traction cables or counterweight systems like a hoist, or pump hydraulic fluid to raise a cylindrical piston like a jack.

In agriculture and manufacturing, an elevator is any type of conveyor device used to lift materials in a continuous stream into bins or silos. Several types exist, such as the chain and bucket elevator, grain auger screw conveyor using the principle of Archimedes’ screw, or the chain and paddles or forks of hay elevators.

Languages other than English may have loanwords based on either elevator or lift.

Elevator lobby at the Forest Glen Washington Metro station in Silver Spring, Maryland
Because of wheelchair access laws, elevators are often a legal requirement in new multistory buildings, especially where wheelchair ramps would be impractical. 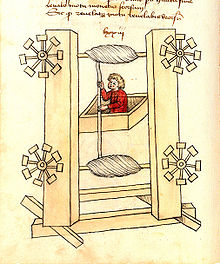 The earliest known reference to an elevator is in the works of the Roman architect Vitruvius, who reported that Archimedes (c. 287 BC – c. 212 BC) built his first elevator probably in 236 BC. Some sources from later historical periods mention elevators as cabs on a hemp rope powered by hand or by animals.

In 1000, the Book of Secrets by al-Muradi in Islamic Spain described the use of an elevator-like lifting device, in order to raise a large battering ram to destroy a fortress. In the 17th century the prototypes of elevators were located in the palace buildings of England and France. Louis XV of France had a so-called ‘flying chair’ built for one of his mistresses at the Chateau de Versailles in 1743.

Ancient and medieval elevators used drive systems based on hoists or winders. The invention of a system based on the screw drive was perhaps the most important step in elevator technology since ancient times, leading to the creation of modern passenger elevators. The first screw drive elevator was built by Ivan Kulibin and installed in Winter Palace in 1793. Several years later another of Kulibin’s elevators was installed in Arkhangelskoye near Moscow.

The development of elevators was led by the need for movement of raw materials including coal and lumber from hillsides. The technology developed by these industries and the introduction of steel beam construction worked together to provide the passenger and freight elevators in use today.

Starting in the coal mines, by the mid-19th century elevators were operated with steam power and were used for moving goods in bulk in mines and factories. These steam driven devices were soon being applied to a diverse set of purposes – in 1823, two architects working in London, Burton and Hormer, built and operated a novel tourist attraction, which they called the “ascending room”. It elevated paying customers to a considerable height in the center of London, allowing them a magnificent panoramic view of downtown.

Early, crude steam-driven elevators were refined in the ensuing decade; – in 1835 an innovative elevator called the “Teagle” was developed by the company Frost and Stutt in England. The elevator was belt-driven and used a counterweight for extra power.

The hydraulic crane was invented by Sir William Armstrong in 1846, primarily for use at the Tyneside docks for loading cargo. These quickly supplanted the earlier steam driven elevators: exploiting Pascal’s law, they provided a much greater force. A water pump supplied a variable level of water pressure to a plunger encased inside a vertical cylinder, allowing the level of the platform (carrying a heavy load) to be raised and lowered. Counterweights and balances were also used to increase the lifting power of the apparatus.

Henry Waterman of New York is credited with inventing the “standing rope control” for an elevator in 1850.[14]

In 1845, the Neapolitan architect Gaetano Genovese installed in the Royal Palace of Caserta the “Flying Chair”, an elevator ahead of its time, covered with chestnut wood outside and with maple wood inside. It included a light, two benches and a hand operated signal, and could be activated from the outside, without any effort on the part of the occupants. Traction was controlled by a motor mechanic utilizing a system of toothed wheels. A safety system was designed to take effect if the cords broke. It consisted of a beam pushed outwards by a steel spring. 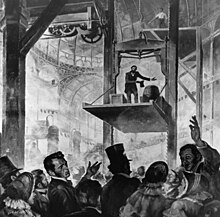 In 1852, Elisha Otis introduced the safety elevator, which prevented the fall of the cab if the cable broke. The design of the Otis safety elevator is somewhat similar to one type still used today. A governor device engages knurled roller(s), locking the elevator to its guides should the elevator descend at excessive speed. He demonstrated it at the New York exposition in the Crystal Palace in a dramatic, death-defying presentation in 1854, and the first such passenger elevator was installed at 488 Broadway in New York City on March 23, 1857.

The first elevator shaft preceded the first elevator by four years. Construction for Peter Cooper’s Cooper Union Foundation building in New York began in 1853. An elevator shaft was included in the design, because Cooper was confident that a safe passenger elevator would soon be invented. The shaft was cylindrical because Cooper thought it was the most efficient design.Later, Otis designed a special elevator for the building. Today the Otis Elevator Company, now a subsidiary of United Technologies Corporation, is the world’s largest manufacturer of vertical transport systems.

The Equitable Life Building completed in 1870 in New York City was the first office building to have passenger elevators.

The first electric elevator was built by Werner von Siemens in 1880 in Germany. The inventor Anton Freissler developed the ideas of von Siemens and built up a successful enterprise in Austria-Hungary. The safety and speed of electric elevators were significantly enhanced by Frank Sprague who added floor control, automatic elevators, acceleration control of cars, and safeties. His elevator ran faster and with larger loads than hydraulic or steam elevators, and 584 electric elevators were installed before Sprague sold his company to the Otis Elevator Company in 1895. Sprague also developed the idea and technology for multiple elevators in a single shaft.

In 1882, when hydraulic power was a well established technology, a company later named the London Hydraulic Power Company was formed by Edward B. Ellington and others. It constructed a network of high-pressure mains on both sides of the Thames which, ultimately, extended to 184 miles and powered some 8,000 machines, predominantly elevators (lifts) and cranes.

In 1874, J.W. Meaker patented a method which permitted elevator doors to open and close safely.[21] In 1887, American Inventor Alexander Miles of Duluth, Minnesota patented an elevator with automatic doors that would close off the elevator shaft.

The first elevator in India was installed at the Raj Bhavan in Calcutta (now Kolkata) by Otis in 1892.

By 1900, completely automated elevators were available, but passengers were reluctant to use them. A 1945 elevator operator strike in New York City, and adoption of an emergency stop button, emergency telephone, and a soothing explanatory automated voice aided adoption.

In 2000, the first vacuum elevator was offered commercially in Argentina.