Up until about 1903, either drum-type elevator machines, wherein the rope was wound on a cylindrical drum, or the hydraulic-type elevator (the direct-plunger hydraulic or the roped hydraulic machine) was the principal means of hoisting force. Both had severe rise limitations: the drum type, in the size of the drum; and the hydraulic type, in the length of the cylinder. The drum-type elevator had the further disadvantage of requiring mechanical stopping devices to shut off power to prevent the car from being drawn into the overhead if the machine failed to stop by normal electrical means. On a hydraulic machine this is prevented by a stop ring on the plunger.

The traction machine had none of the rise disadvantage of either the hydraulic or drum machine. The traction principle is a means of transmitting lifting force to the hoist ropes of an elevator by friction between the grooves in the machine drive sheave and the hoist ropes. 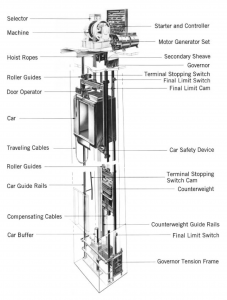 The safety advantages of the traction-type elevator are manifold: Multiple ropes are used, each capable of supporting the weight of the elevator, which increases the suspension safety factor as well as improving traction. The drive sheave is intended to lose traction if the car or counterweight bottoms on the buffers in the pit. However, this is
not universal and depends on the proper condition of ropes, sheave, loading, and so on. The possibility of the car or counterweight being drawn into the overhead in the event of electrical stopping switch failure is reduced.

Traction elevators are capable of exceedingly high rises, the highest (or lowest) being in a mine application in South Africa for a depth of 2000 ft (600 m). The critical factors become the weight of the ropes themselves and the load imposed on the sheave shaft and its bearings. It was the traction elevator, in addition to other advances in building
technology, that made today’s tall buildings of 100 or more stories practical.

The traction principle has been available for centuries. The capst

an on a ship is an example. The first known elevator application was the “Teagle” hoist, which was present in England about 1845, as show in the figure below. 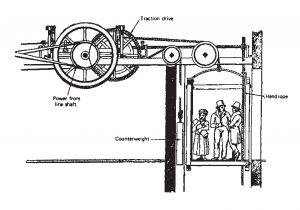 This old print shows the traction drive and the counterweight. Motive force was provided by means of belts to the line shafting in the building where the lift was installed. The operation was by handrope, as described for the hydraulic elevator shown in Figure below. 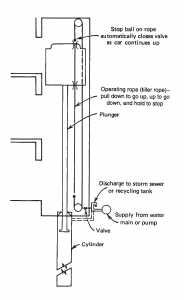 The handrope acted to engage the belt to the drive pulley, usually to the right or left of an idler pulley, to move the lift up or down.

A development that has taken place in the past 10 years or so has been the location of a gearless-type machine in the hoistway either at the side or rear near the top. This results in the so-called “machine room–less” (MRL) elevator and is unique to various manufacturers. This machine has been redesigned into a “pancake” configuration, and the space over the hoistway is minimized. It has only been used in newer buildings, and the basic traction designs discussed in this chapter are still being applied and can be found in thousands of existing buildings and many of the newer ones.

With the application of electrical drives to elevators, the versatility of electrical versus mechanical controls allowed for certain standards of elevator operation and control, so that time-related factors in an elevator trip could be  stablished. Speed no longer depended on varying water or steam pressure. The Ward-Leonard system of electric motor speed control was introduced early in the 1920s and allowed the smoothness of acceleration and deceleration common in elevators of today.
The Ward-Leonard system employs a motor generator driven by either an ac or dc motor, the output of the generator being directly connected to the armature of the dc hoisting motor. Varying the voltage on the field of the generator varies the dc voltage applied to the hoisting motor armature and, consequently, the speed and torque. The Ward-Leonard motor-generator hoisting machine combination, generically known as “generator field control,” was the quality standard for many decades, from the 1920s through the 1980s. Thousands of elevators still employ it. The major change is in the machine room. The motor generator is gone, as is the selector shown in the background. The controller is no longer full of relays but replaced by a compact microprocessor and the silicon controlled rectifier (SCR) drive.

Replacement of the motor generator by solid-state control, introduced in the 1970s, hassuperseded, in most instances, motor generators in both new installations and modernizations. One approach to a solid-state control system is to employ SCRs to convert the line ac into varying dc for the operation of a dc hoisting machine. Most of the higher-speed elevators, 500 fpm and above, use this approach, and it is favored for the modernization
of existing elevators as well. A second approach is to employ SCRs to develop a variable voltage, variable frequency (VVVF) ac power for an ac driving machine. This is the favored approach for lower-speed (up to 500 fpm) geared machines.

Most new traction elevators are expected to have the VVVF control as further development of higher-speed gearless-type elevators proceeds. It is almost universally used with the new geared installations and is being applied as an upgrade to the thousands of single-speed, low-speed (100–150 fpm) ac machines that were widely used in the many
six-story apartment buildings built in the late 1940s and through the 1950s.

The microprocessor has been a major innovation in the past decade, and practically all of the new and modernized installations employ one or more in both the controland operating systems. Details are to be found in next articls, “Elevator Operation and Control.” .

Greater emphasis on machine room environmental conditions such as airconditioning and electromagnetic interference must be considered, as well as the quality of the incoming power supply, both under normal conditions and when anemergency generator is used.

In the serie of this articls the operating characteristics of electric elevators are described, and a basis for time study calculations of elevator trips is established. These time factors will become the basic tools in establishing the number of elevators necessary for any type of building and will be related to the speed at which people can be moved from place to place vertically. As a preliminary, familiarity with modern.

The Next Article Will Be About Gearless Traction Elevators.